Welcome to the guamwriters.com site 2022!

There's a workshop happening on SAIPAN, if you're planning a trip! 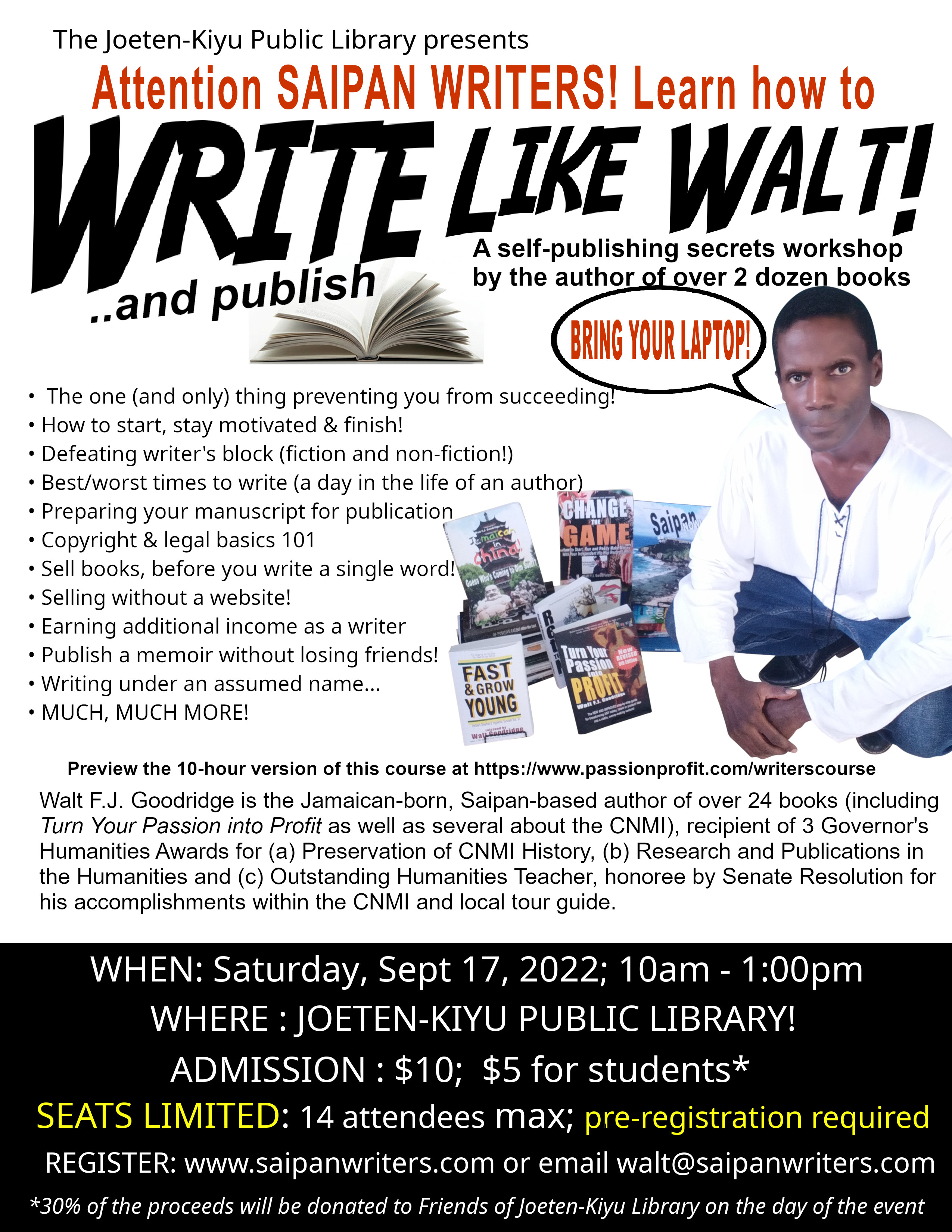 As an author, what others may refer to as your "little flights of fancy" have the power to set you free! Are the rumors true? Did I really turn down a publishing contract so I could maintain that freedom!? Read all about it in the Marianas Variety and in The Saipan Tribune -- Walt Goodridge (Saipanwriters & Guamwriters founder)

So, how was the workshop on Guam? "If I had known it was this doable, I would have published my book idea a long time ago!"--Tyrone B (see Tyrone's video below)
***** Hafa Adai, Walt,
"I knew that I wanted to attend your workshop when I first learned about it in one of Guam’s newspapers. However, I’ve been on a deadline for a video documentary and dismissed the opportunity to go because of time constraints. That changed this morning when I saw the announcement again in the newspaper. I decided I had to attend, even though I had to leave early because of a prior commitment, I am glad I attended.
"I was interested for two reasons, first to see how you conduct your workshop because as one who conducts oral history workshops I want to see how we measured up to each other. You are engaging and informative and my attendance affirmed many of the same beliefs and attitudes I have towards my success in the collection and publication of oral history in the Mariana Islands. I tell everyone not to pass up opportunities.
"The second reason I attended is because I have been wondering if print on demand is a viable publishing option, and I learned this morning that Kindle has worked for you and I am convinced that it can work for me too.
"Thank you for making the effort to come to Guam."
Rlene Santos Steffy
Ethnographer/Oral Historian
Rlene is already an accomplished author and presenter, check out
1. KUAM-TV: Rlene Santos Steffy on her journey chronicling Guam's history
2. PACIFIC DAILY NEWS: Local author publishes children's book in Chamoru
***** "It was chock-full of information - you dismantled all our excuses for not writing a book, Walt! LOL"--Jeni Ann Flores
***** Mr. Goodridge,
I saw the flyer about the workshop and registered on a whim. Writing a book was merely something that I thought would be nice to do “one day,” but I decided to attend the workshop because I had some free time and wanted to learn something. I am so glad that I made that move! It was such an informative session and certainly worth more than what I paid. “One day” is closer than I initially believed—thank you!"-- Marie Lizama
P.S. I hope I didn’t come across as too formal with the way I addressed the note. I didn’t want to appear disrespectful. You made us feel so comfortable, and if you want to convey that feeling to anyone who visits the site please feel free to change “Mr. Goodridge” to "Walt." :-)
*****

The STORY of Workshop #1 on Guam!
(10th in the "Little Flights of Fancy" workshop series) It happened here. The DNA Building in Hagåtña
For the few days leading up to the event, posters were plastered all over the DNA Building: in the lobbies, elevators, at the Credit Union, and even at the security guard booth ! Herman and me at the security guard booth!

The Media Publicity Leading up to the Workshop!

An announcement appeared in the Guam Daily Post
On Thursday, at the suggestion of Kevin Kerrigan at the Daily Post, I called up K-57AM talk radio upon landing on Guam.

I was expecting to be given an email address to send a press release, or a phone number of someone to speak with. Instead, before I even finished telling the operator what the event was about (I got no further than "It's a writers workshop here at the DNA Building for aspiring authors who wish to---"), I was immediately put through to the studio host, and, while parked at a gas station on Marine Corps Drive, got to announce the event on the air during the Andrea Pellacani Show's summary of the Liberation Day activities and events. Listen to audio of the on-air call: Announced on K57-AM talk radio! Click above to listen

The Guam Business Journal (Glimpses Media) posted the event for their subscribers on their Business Events Calendar on the MBJ website. (Thanks Maureen! Thanks Meghan!)

The Day Before the Event:

On the Friday before the event, Melissa the DNA operations manager, her son and security personnel made sure the 58-inch flat screen that we rented from Dial, plus the wifi and room set-up were all in order! Making sure all is in place!
One of my books, From Bugle Boy to Battleship that I co-wrote with friend, and visiting Battle of Saipan/Battle of Guam veteran Lloyd Glick was featured on the KUAM Primetime news! Veteran Lloyd Glick shows off "From Bugle Boy to Battleship," the book he and I wrote
Lloyd and two other dignitaries are interviewed upon their return to Guam after 75 years

Then, on the morning of the event--Saturday, July 20, 2019--attendees from many backgrounds and experience filed in before 9am, and we got rolling by 9:05! For three hours, we went on a journey understanding the industry, embracing the technology, finding inspiration, generating ideas, mastering the creative process, completing the project, reviewing the finished product, and then.....the secret sauce! (You'll have to attend the next workshop to discover what that is!) Rlene S. shares her "writers block" advice with the group Discussing the best trim size and margins for your book. (Photo by: Dianne Strong) Weighing the pros and cons while uploading! (Photo by: Dianne Strong) The Culmination and Aftermath!! And extra special thanks to Joe Hill on Saipan, and Dave, Letitia, Melissa, Avery, Vincent and Herman at DNA Inc, (and to all the organizations and people mentioned above) for making it all happen and run so smoothly on short notice! As we say in Jamaica, "Nuff Respek!"

Want to host the next workshop on Guam, Palau, Pohnpei or wherever YOU live? Contact walt@saipanwriters.com

Walt Goodridge's "Little Flights of Fancy" World Tour comes to Guam!
Are you an aspiring author? Do you have an idea for a book? Have you always wanted to write a novel, a “how to” manual, a book of poetry or travel photographs or even chronicle your family history? Are you suffering from writer's block? Well, during a unique three-hour, hands-on workshop on SATURDAY, July 20, at the DNA Building in Hagåtña, Guam, prolific author Walt F.J. Goodridge will share step-by-step instructions on how to achieve your dreams!
"It's much easier than people realize," Goodridge explains. "Internet technology, print-on-demand publishing, and the rise of e-readers [Kindles and Nooks] have lowered the barriers for entry. I'm going to show how to go from book idea to book sales in less than 24 hours, even before you write a single word or print a single book! Bring a laptop and take notes!"
Goodridge, a Columbia University graduate with a Bachelor's in Civil Engineering, walked away from his career to pursue his own passion for writing and sharing information. He is author of Turn Your Passion into Profit, and over two dozen other books--some of which have been used as texts for high school and university courses, as resources by other coaches, and excerpted and quoted by “Guerrilla Marketing” guru Jay Conrad Levinson, music industry pioneer Chuck D, and other business authors worldwide. Walt and his PassionProfit™ philosophy and formula have been featured in Time Magazine, Billboard, Entrepreneur, The Wall St. Journal and other publications.
Since escaping the New York rat race to live on Saipan, Goodridge--who was recognized by CNMI Senate Resolution 15-54 for his contributions to CNMI society--has written several books about the islands including Jamaican on Saipan, and Chicken Feathers & Garlic Skin: Diary of a Chinese Garment Factory Girl on Saipan, and The Saipan Living Relocation Guide, and Doing Business on Saipan, and Saipan Now: a photo adventure, and There's Something About Saipan, and From Bugle Boy to Battle Ship: a Battle of Saipan & Battle of Guam Veteran’s Memoir a book he wrote with 95-year-old Lloyd Glick who will be on Guam for this year's 75th Liberation commemoration.
Goodridge recently turned down a publishing deal with a million-dollar UK-based company when that publisher referred to Goodridge's works as "little flights of fancy." Walt will share the full story behind that, in addition to how you can put yourself in a position to do the same!
The workshop will be held on Saturday, July 20, 2019, from 9:00am to 12noon, on the 7th floor of the DNA Building. Admission is $10 in advance, and $12 at the door ($5 for students with ID).
Seating is limited. To pre-register, please visit www.guamwriters.com. To see photos and success stories from past workshops, visit www.saipanwriters.com. Attendees are asked to bring a laptop, pen and paper and every question they've ever had about writing and publishing!
###


• Images to accompany press release (feel free to share and publish)
right click on image, then "save image as" to desktop or folder: • Read about workshop success stories on Saipan, Tinian and the mainland US at www.saipanwriters.com • Learn more about my books and brands at www.waltgoodridge.com • Want to live your dream life as a full-time author or other "passionpreneur?" Check out my Turn Your Passion Into Profit philosophy and formula, AND my CV&Media Kit which includes my "Pacific-Specific" Resume! "Once upon a time, there was a Jamaican civil engineer living in New York who hated his job, followed his passion, started a sideline business publishing his own books, found the courage to quit his job, escaped the rat race, ran off to a tropical island in the Pacific, and started a tourism business so he could give tours of the island to pretty girls every day (and do occasional writers workshops!), live a nomadpreneur's dream life."....and now helps others live true to themselves!
Walt is author of Turn Your Passion into Profit as well as Ducks in a Row: How to find the courage to finally QUIT your soul-draining, life-sapping, energy-depleting, freedom-robbing job now...before it's too late..and live passionately ever after!

Yes, I occasionally take on new coaching clients as my schedule and commitments allow. Email me for more details and Learn more about my other brands and identities at www.waltgoodridge.com

LOCAL AUTHOR RECEIVES CNMI GOVERNOR'S HUMANITIES AWARD(S)
A few weeks ago, a former workshop attendee and coaching client revealed that she nominated me to be considered for this year’s Governor’s Humanities Award here on Saipan. I thanked her, but I didn’t really believe I qualified because...(read why at www.jamaicaninchina.com/humanities-award)

Check out the FREE Preview of the Saipan Tour App! Can't make it to Saipan during the pandemic? No worries! Check out this FREE preview of the Discover Saipan Tour App and experience the island's SECOND best tour experience! This special online version of the self-guided, GPS-assisted app, is available for a limited times! https://www.cnmitourism.com/saipantourapp/preview Please allow a few moments for all the graphics to load! The mobile app (only $1) is available on the Google Play Store (See "About the App" for the link)
Donate, support Walt's Projects